But what about hurty feelings?

Being offended or being offensive have become the focus of so many liberal politicians and commentators. Its like there is a pandemic of hurty feelings causing the destruction of our society.

While Ardern got a rowdy response for her rushed through gun laws, we are experiencing real crime, crime that leaves people physically injured or dead.

In Auckland last week there were 7 gun related incidences in one night. Shootings are up and gangs are running amuck shooting various forms of guns at each other, no doubt some are semi automatic weapons like the weapon that killed officer Matthew Hunt.  I wonder if anyone mentioned that to the Harvard kids while they dream of a society where they are safe.

What happened to sticks and stones may break my bones but words will never hurt me?

Now you are in more danger of being targeted by the authorities for mis-gendering and angry vegan on line than you are ram raiding a dairy in a stolen car.

It’s all labelled as hate crime, in some strange way the powers that be are attempting to mollycoddle those that the state think need extra protection. Shielding us fragile from the things that we all have to put up with time to time, being a little bit offended by someone else’s thoughts.

Priorities seem a little whack here. Hang around in a toilet selling drugs to kids and you’re good to go, tell a gruff hairy fat transvestite to use the other public toilet because your daughter is in the lady’s, and you are in need of changing the way you think with a visit from the boys in blue.

Yes being insulted isn’t fun, you can feel a little downtrodden, a bit sniffly for a while and perhaps a little gun shy (excuse the pun). But we have all been there. Unless you are a perfect specimen of a human and have an impeccable choice of every word you speak you are going to come under the scrutiny of your peers and detractors. Yes sometimes your opponent will pay the man rather than the ball and insult you. The good news is that the offence may cause you to shed a tear and feel a little less confident for a while but you eventually bounce back and get on with life.

So online abuse being a problem?

Here is some helpful tips

Consider how important it is you let everyone on social media know exactly what you think of everything you disagree with.

Balance your participation on social media or other aspects of life to suit your tolerance to being berated by some sweaty man in a super hero suit that is baggy in all the wrong places (AKA Ardern’s fans).

If you are easily offended, it may pay not to start arguments on every post on a platform that you triggers you. Your opinion isn’t a requirement on social media and you can accept that some people may have a different opinion to you. We all know that opinions are like arseholes and everyone has one. Technically this last sentence is offensive to those with colostomy bags who don’t have physically have an arsehole, but where do we stop with hate crime?

Yes we should encourage others to be nice but the reality is some people love arguing on line and sometimes they are abusive.

The rules we have in law is that if you threaten harm someone, encourage someone to harm themselves or encourage others to harm someone else, then you are breaking the law. These people are the ones that should be paid a visit by some boys in blue. But if you write a poem that jokingly takes the piss out of a gender fluid pink haired bearded pregnant man, do you need to be in breach of a “hate crime?” or should the police focus on the people running around shooting at others with bullets? 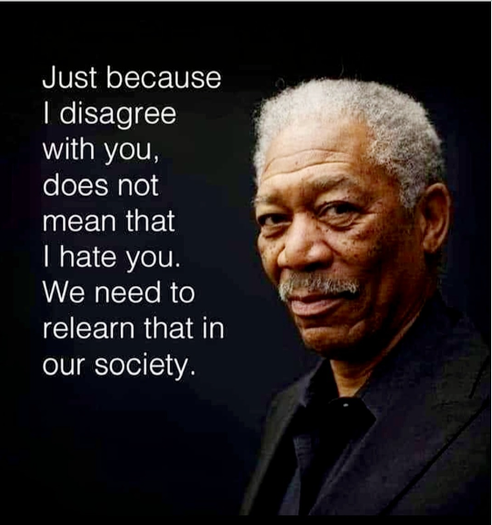