Of all the ridiculous claims that our lying Government and their complicit media can come up with, possibly the most ridiculous is that Russia has a COVID-19 disinformation project running to fool Kiwis into believing the scientific studies coming out showing that the hasty use of an untested vaccine was anything but a good idea.

A very concise and well read gentlemen explained to Andrew Dickens on Talk back radio about the evidence that has come to light post the mass vaccine roll out. The lack of proper testing protocols, data tampering, unblinding of studies and the list goes on. Not to mention the under reporting of adverse events, fertility problems and increases in other ailments such as shingles, cancer, blood clots and heart problems.

These are all facts that are published in medical journals and publications, discussed by many commentators in the US, UK and other areas. All genuine info that have come from court orders and released by the FDA and other medical faculties

All that Dickens (by name and Dick by nature) could retort to these comments was, “Russian disinformation”

What a plonker, and obviously he is under instruction to say that statement (Russia disinformation) to anything where his IQ has no ability to formulate a well thought out counter argument.

So in the middle of a war, with sanctions, massive energy contracts, working out what currency to trade in, manufacturing weapons to continue a war, exports, importing essential equipment, managing relationships with allies and foes, the threat of nuclear war etc etc etc. They are also trying to feed disinformation of COVID-19 to Kiwi conspiracy theorists?

How dumb to they think the public is. David Fisher who seems to be a stranger to the truth whenever it suits him is blaming an explosion of Russia disinformation for the capital protests. It wasn’t that a whole lot of people didn’t like losing their livelihoods, family, jobs, houses etc due to the draconian mandates. It was Russians under the beds all over again – for what purpose we can only dream up.

Due to Trumps popularity in NZ, most are still working on the misinformation that Trump colluded with Russia to win the 2016 election. Somehow Russia used a couple of grand in Facebook adds to con yanks into voting for Trump, but now they can’t convince anyone that they are not the baddies in Ukraine. If you believe that then I can think of a few nice bridges you can buy.

Our five eyes spies have apparently told the Ministry of Foreign affairs and that pillar of Truth Nanaia Mahuta that the Kremlin have troll farms working the New Zealand and the anti vaccination movement.

Sure Sure, meanwhile we get fed he biggest load of propaganda from the very same agencies, claiming anything in the contrast to the lies we are fed, is Russian Disinformation.

Pull the other one. I suggest you read up on the science as there is a whirlwind of court cases that will spread across the globe and it isn’t going to be pretty. 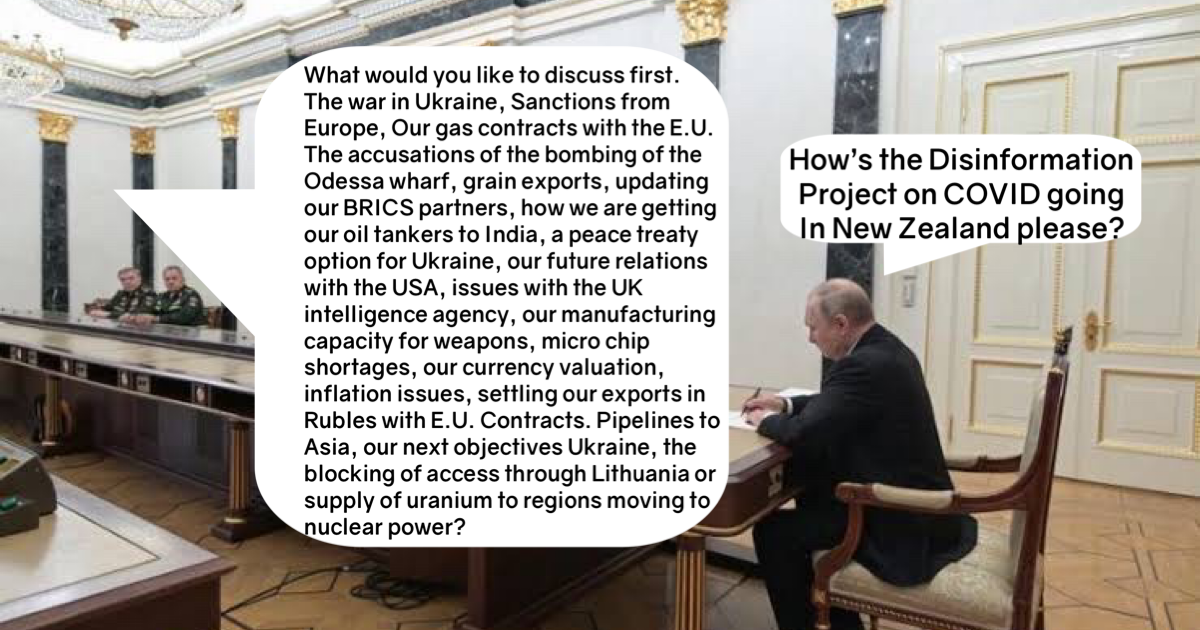