The Criminal Censorship of Ivermectin

Ivermectin has saved the lives of those that used it, is safer than Panadol and because of the collaboration between Big Pharma and the medical journals they fund you find that Pharma and MedSafe have still got a warning on its use. 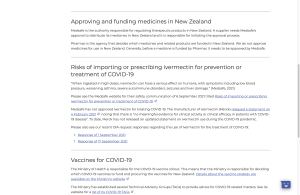 Here is a must read series of substack reports on the sickening censorship of one of the greatest drugs ever to be created.

So much data out there showing its benefits and our medical advisors go off the statement from Merck that they don’t know if its any good.

The short and simple reason that this is happening is that there is no benefit to Merck to do studies on it, it will make them no money as it no longer is under license. Instead Merck would rather you bought molnupiravir which they do have under license at a cost of $1,200 for 5 days treatment. This is approved in New Zealand.

The real kicker is that molnupiravir performed poorly in its trial compared to the “game changer Merck claimed it was going to be. Ivermectin continues to save lives, but not in NZ.

This is the sad world of Big Pharma and it is business as usual. the directors need profits for their shareholders so a legal requirement to maximise profits over saving lives.

It is also why Medsafe should not be assessing the validity of Ivermectin based on the recommendation of the original manufacturer as if Merck said we tested Ivermectin and it works a treat. The sale price would be $3.14 cents. but we pay $1,200 for an inferior product.

As taxpayers can we take issue with our Government?