The War has begun – We are all Dutch Farmers now!

It is getting very clear why we are not getting news on the protests around the world. They do not want us getting wind of the unrest. after all it is now a war against the elite.

The Dutch Farmers have turned up the heat on the WEF lead Government and their plan to halve the countries nitrogen and ammonia pollution by 2030. This will require farmers to go out of business as the reduction in herd sizes etc make farming for many, financially unviable

The protests have been remarkably heated, as tens of thousands take to the streets to block the country’s highways, torch bales of hay and spread manure around politicians’ homes. In one incident, Dutch police actually fired live rounds on one of the protesters as he attempted to breach the police line with his tractor.

Yet the media in NZ is silent on the second largest exporter of produce in the world having the farmers revolt in such an effective way. they have brought the country to its knees.

Yes, the scenes coming out of the usually quiet Dutch countryside are shocking. But they should not be. They are just the early stages of a great worldwide battle that is shaping up between the free people of the world and the technocrats, who are starting to clamp down on them in the name of the 2030 Agenda for Sustainable Enslavement.

Make no mistake: Whoever you are, wherever you live, whatever you do, these power-hungry elitists will be coming after your livelihood next. We are all Dutch farmers now.

Mark Rutte is a policy advisor for the WEF, he is also the Prime Minister of the embattled country and is enacting the further stages of the Climate Change propaganda driven war on the working class.

The policy is getting traction through the WEF influenced European Union and other regions around the world including the autocratic Canada that has already shown what they are willing to do to protestors, namely shutting them out of the financial system for daring to question their rules. It is no wonder Trudeau is treating crypto currencies under the terrorist arm of their financial legislation.

“Denmark, Belgium and Germany are already considering similar [nitrogen reduction] policies” and both the UK and US have already put schemes into place to pay farmers not to farm.”

The Great reset is upon us and the battle lines are being drawn. It started with the yellow shirts in France where everyone remembers the protests but hardly anyone remembers what they were for.

“do you remember why that movement started? Probably not, because the answer doesn’t fit into the MSM propaganda narrative very easily. Carbon taxes. The original protests were about carbon taxes.”

Climate Change being an existential threat is the invention of the malthusian elite, and a means to an end. It is an easy sell and one that impassions people to save the planet while they blame themselves for the dire state of the globe. Create a problem and let the working class feel responsible for the problem is as genius as it is sick.

The mask is coming off the green agenda now and people are waking up that it is an attack on our livelihood and way of life. The “how dare you” isn’t a cry from a depressed Scandinavian child. It is her elite handlers that no longer want a world plagued by a middle class enjoying the things they deem only they should be eligible for. How dare you live like us, is what they are saying.

As I’ve documented before, this great struggle between the unwashed masses and their would-be neofeudal overlords was coming to a head in late 2019 . . . but that great confrontation was averted by the scamdemic. Suddenly, millions of people who would have been out on the streets protesting the latest carbon taxes and green craziness were now locked in their homes by their governments—many of them willingly. But now that the television isn’t telling people to lock themselves in their home out of mortal fear of the corona cooties (unless you live in China), the temporary ceasefire has ended. The next shots in this war are being fired by farmers in the Netherlands.

To many it must bigger belief that in the middle of a food and fertiliser shortage, partially due to sanctions on Russia and Belarus, partially due to gas shortages, that an attack on food production can be rolled out at the same time. It is no longer simply an accident of incompetence.

We’re well past the point where any of this could be considered accidental, aren’t we? Put it this way—if the collective governments of the Western world were trying to impoverish and starve their own citizens, what exactly would they be doing differently?

As a window into the soul of how the elites are thinking and plotting the demise of the working class, here are some quotes from the powers that be as to their total contempt for us.

“Witness Ontario Liberal candidate Granville Anderson’s recent assertion that rising gas prices actually provide a “silver lining”: fewer of the minions will be able to afford to drive, forcing them to “find other modes of transportation.” (In other words: “Let them eat electric cars!”)

World Economic Forum (along with numerous other globalist entities) declaring that lockdowns were “quietly improving cities” by keeping people from engaging in their normal day-to-day activities.”

Preventing people going about earning a living while they grew further into poverty, with social isolation and depression driving many to substance abuse, domestic violence and suicide is a good thing in their mind.

We are at the crossroads

“Whether we know it or not, we are at war. And, whether we know it or not, that war is a battle between the overwhelming majority of the human population and the few at the top who seek to control (and simultaneously reduce) that population. The battle lines may not always be so clear—there are many unwitting dupes who act to shore up the systems of technocratic control without knowing what they are doing. And there are those who still believe in the core lies of the globalists—the climate change hoax, for example—and thereby unknowingly play into their 2030 Agenda.”

We are being played by those that know how to manipulate and take our eyes off what is going on.

Recently Ardern made a speech in the face of growing tensions between the China/Russia lead Bloc and the West, that we should be focusing on the “violence of climate change.” rather than picking sides.

Ardern is a WEF loyalist, why else did she ban oil and gas exploration in NZ. This single move reduced any ability of energy independence in New Zealand. A move like this is only born from an agenda who’s loyalties are not on the side of the people of New Zealand.

We are locked in a left versus right battle that is nearing its own war. Divided by the perceived ideologies of political correctness, vaccination status, trans phobic claims, racists and what is a woman.

Any way that we can be split into smaller and smaller groups helps their battle strategy. Pro life is the latest divide. We are all busy arguing and protesting the small stuff while the elite use the green agenda to quietly pry our very existence from our grasp.

When you have no income, no purpose and are reliant on handouts from the combined big business/government model. When the collapse of the financial system has stripped us of our assets and rights and we own nothing and are instructed to like it, it will be too late to unite against this tyranny.

We must realise that it is possible for the politically misaligned to still unite against a common cause. We must rid ourselves of the politicans and big business on board with the WEF agenda.

Across Europe, people are rising up in solidarity with the Dutch farmers. German farmers are helping Dutch farmers blockade the German-Dutch border.  Italian farmers are staging demonstrations under the rallying cry, “We are not slaves, we are farmers!” Polish farmers are resisting in Warsaw. Even the Canadians are getting in on the act, carrying “I stand with Dutch farmers” signs at their own freedom rallies.

And, just this week, a new video has emerged calling for worldwide protests in support of the Dutch farmers. Sporting the tagline “The World is Going Dutch,” the video likens the current resistance movement to nonviolent resistance movements of the twentieth century and calls on people around the world to stand in solidarity with farmers in the Netherlands in a worldwide day of protest on July 23rd.”

Shame on the NZ media who are no longer there to hold the Government to account, they are neck deep in this and are therefore no longer the Fourth State, they are the enemy of our state (of life). 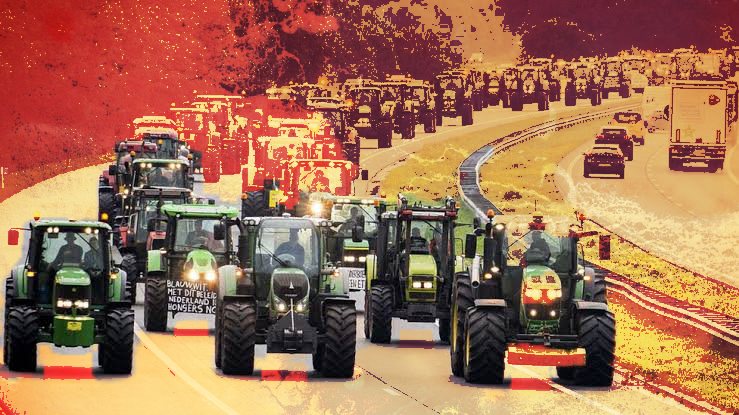