U.N. resolution on combating glorification of Nazism and Neo- Nazism

December 16 2021 UN resolution against Nazism is introduced by Russia for voting on.

The vote is to pass the resolution Combating glorification of Nazism, neo-Nazism and other practices that contribute to fuelling contemporary forms of racism, racial discrimination, xenophobia and related intolerance.

Here is the full document which was agreed to.

The abstaining countries were all the Western Europe Bloc, Canada, New Zealand Australia and Japan

However what is interesting is 2 countries voted No to combating the glorification of Naismith and no/ nazism.

Ukraine and the U.S.

Whilst abstaining is an understandable stance to take given the obvious dislike of the western countries to Putin’s Russia. It seems a little odd to vote No to the premise of the resolution.

It does give a little clue as to which countries are perhaps a little more sympathetic to Russia though.

Putin invading Ukraine may have United Europe against Russia, but I don’t see Russia going cold next winter. The same can’t be said about much of Europe. 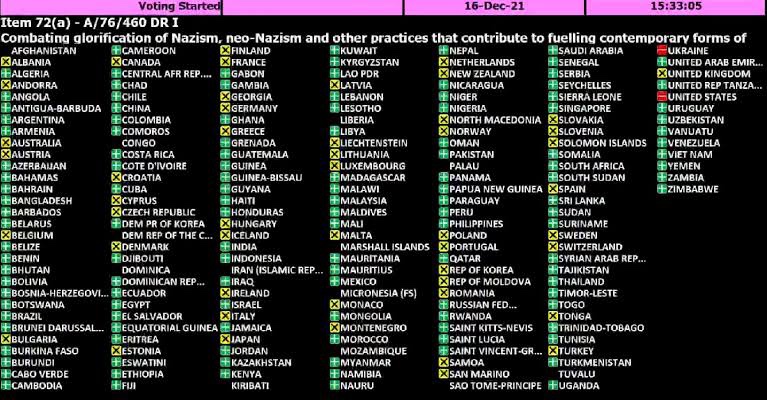