Were lock downs the real killers?

That pesky country that likely triggered even the calmest of epidemiologists (or their friends in the media) is Sweden. The country that dared to be different, and was mocked by the international media for its outlandish response to the COVID virus.

They did nothing, well almost nothing.

Early on in the pandemic, when you tried to logically discuss the Government response with the fear riddled punters, it wouldn’t be long before a sharp rebuke would arrive which usually sounded like, “would you rather be Sweden?” Like this was some sort of mic drop moment about how irrational you were being.

How dare the Swedes still go to work, how dare the kids still go to school, How dare you still go to the pub and with the only guidance from the Government being that if you are feeling unwell, then stay at home.

How dare you Sweden?

Everyone said look at Denmark compared to Sweden, we must lock down everyone. Sweden became the glaring example of why our freedoms must be removed.

But then something happened. Something that an epidemiologist worth their weight in their chosen field would understand, data started showing the Swedes weren’t so silly getting on with their lives. The difference being rather than our Weetbix Box Dr. Michael Baker the half-baked epidemiologist, Sweden had a seasoned pro.

Anders Tegnell, who knew that you can’t lock everyone down to avoid an outbreak, went for a sensible managed process.

While the rest of the world dusted off the Drop-and-Roll guide to surviving a disaster, Anders did epidemiology like an epidemiologist should. Brave enough to face the detractors he said I know what I am doing. Now did he get everything right? No, he admits he could have protected the aged care facility dwellers better.

However It was always going to take a bit of time to see if he was right.

Tegnall wasn’t alone. Many many epidemiologists and other scientists knew we were doing it wrong and they offered advice, they even signed what is now known as the Great Barrington Declaration. You probably haven’t heard of it as the Media were under strict instructions to call anything epidemiologists say who disagreed with government officials, as disinformation. Oddly enough the contents of the recommendations are now in part being adopted.

Tegnall didn’t have the benefit of knowing about the virus before having to react. Unlike NZ, the virus was already infecting Swedes when Tegnell was tasked with steering his nation through the pandemic.

So what does time tell us 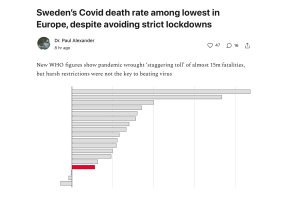 Oh dear among the lowest

We are now being told the virus killed 15 million. That’s what they would like the data to say, but it is obvious now that the “Drop-and-Roll” management of COVID where we were all told to stay at home, and don’t talk to anyone while we work out what to do, was actually the biggest killer.

One day the world will talk about the worst handled crises. It will be the Sweden model that will be studied by those that actually study epidemiology. Michael Baker should try it, he might get famous.

While Klause Schwab and now Bill Gates write books on what to do. It will be remembered that we don’t want to listen to the vogue billionaire boys and rather leave it to people like Anges Tegnall.

I do hope Michael Baker and Rod Jackson heed the Swedes approach, but alas they are more interested in being on telly and getting a prize for being the smartest smarty pants.

Excess mortality is the key to identifying what went wrong and hat went right. The data on COVID deaths is meanigless given it was simply recording if people were testing positive at time of death, regardless of cause of death. Countries like New Zealand will also be useful here as prior to the Omicron break out we had 2,000 excess deaths during the vaccine roll out, whilst only chalking up a couple of dozen COVID fatalities.

Deaths in New Zealand can be broken down into

In the years to come the data whiz kids who arent part of the “don’t let a crises go to waste” brigade will identify who was really at risk of dying from the response.

It is now obvious it wasn’t the Swedes. 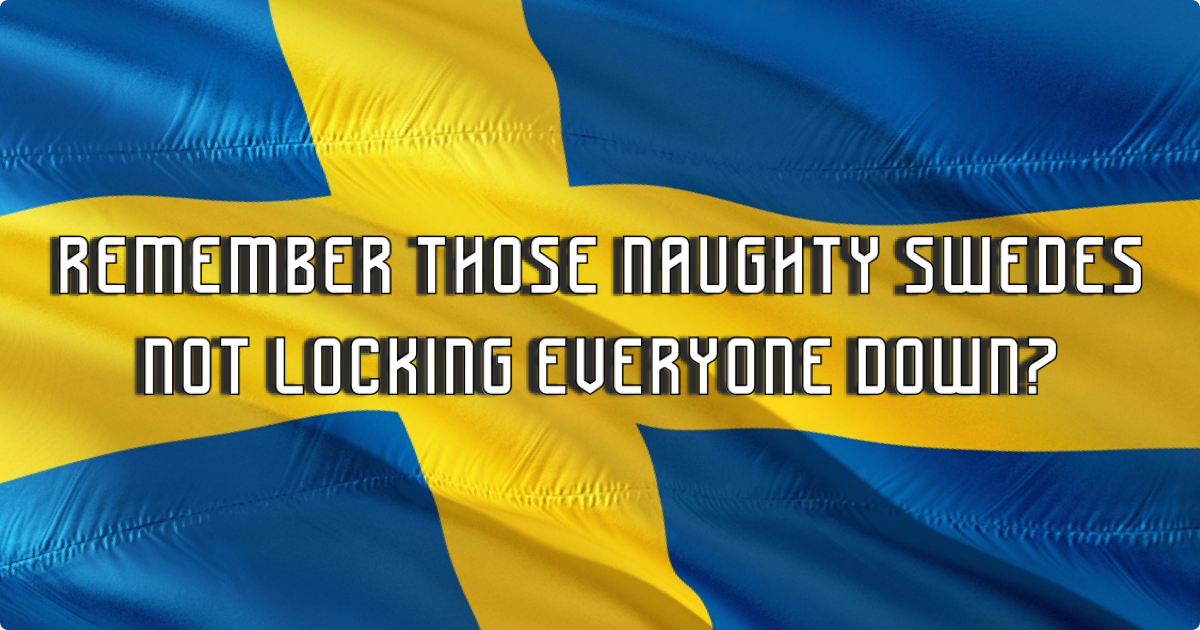