When are the creators of COVID-19 going to be held to account?

The data coming out of the BA5 variant of COVID-19 shows that the virus has moved on.

The sad news on this is that it is now a test for just how much damage the vaccine has done and also whether natural infection will be of any use against the new variants.

Whilst it is clear that a Natural Vaccination will produce antibodies for a longer period of time. Producing antibodies that do not able to stave of an infection is not much good. Where this gets interesting is the effect on the immune system the vaccine has had. If the T cells developed from the vaccine suppress the development of new antibodies, you will be in a situation where your body will take longer to recognise the new variant.

This will mean that the vaccinated will be more susceptible to disease from an infection.

What everyone seems to have forgotten to question is what were they designing in the lab exactly. It is now 99% certain that the Lab Leak theory is the origin. Whistle blowers have said it was part of a number of virus’s being studied for their potential use as bio weapons. One Chinese scientist Dr. Li-Meng Yan who has fled to the USA said a year ago, “You aint seen nothing yet” on what this virus is capable of.

The reality is this virus is not behaving like it’s predecessors. The latest variant is both more contagious and is causing more disease. It is now the vaccinated that are looking at being at the biggest risk end of the virus’s disease producing ability.

Ironically it is again purely by chance that we get to compare outcomes of a variant between two starkly different levels of vaccination take up. Allowing us to assess the efficacy of the the vaccine on deaths, hospitalisations and how it will perform with new variants. We can’t just unvaccinated a portion of the population so trials are only able to be done by comparing similar situations.

We have just that in the current distribution of the BA5 variant. The two countries hit by this variant the most are South Africa and Portugal. One is one of the most vaccinated and boosted countries. the other is at the opposite end.

Portugal went hard on vaccinating and boosting where at one point the Portuguese government said there was no one left to vaccinate.

South Africa has had barely one third of the citizens be vaccinated and barely boosted with only approximately 6 % of the population receiving three jabs.

So We have Portugal with its 10 million people vaccinated to the wahoo and here is there current infection and reported deaths scenario. 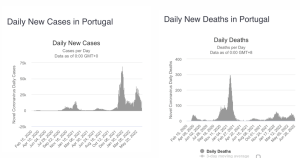 If we compare those stats to the effects of the BA5 in South Africa with its predominantly unvaccinated population of almost 61 million. 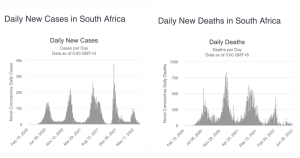 South Africa has had their BA5 wave and the variant was first detected in late February. The wave hit in late April with the country recording 1,403 deaths from Aril 18 to June 18.

Portugals BA5 spike started in May 15 and is dropping down now. Over this period they have recorded 1,591 deaths.

Hospitalisations between the two countries are also very telling 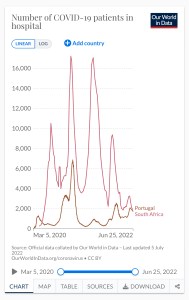 During the spike From the BA5 South Africas hospitalisation rate peaked at around 287 people per Million. Portugal hit 669 per million.

However, a recent preprint study in South Africa found that both being boosted or having had a previous infection offered protection against the virus and found that there was no real difference between the BA5/BA4 varieties versus early Omicron variants

It would be interesting to see what is going on in Portugal and whether this is a case of bad data from Portugal , or a poorly conducted study in South Africa.

It is early days and this is a fast paced variant. it is an opportunity for many of the Alarmists like Sioxsie Wiles and Michael Baker who are once again calling for intervention. However one has to question their reasons.

This is going to be the test of how the vaccinated versus unvaccinated versus prior infections go, one way or the other. It is clear that most have made up their mind about how much they want to participate in any mRNA boosters.

A recent study in Israel between the thrice jabbed (the control) and those with a fourth shot showed an increase in antibodies, this would be a good thing if they were antibodies that had the ability to neutralise the virus. The end result was these medical workers, who were the ones participating in this study, showed no difference in reinfection or infection rates whether they had 3 or 4 jabs.

The study concluded the vaccines were of no use.

All this brings us one of the big question…

If this latest BA5 is more serious which it looks like it could be and the Portuguese reality shows that vaccination status means nothing, then we need to readdress preventative measures that were rubbished or banned due to the reliance on the vaccine.

More studies are finding Vitamin D is a must addition to any supplements you take. The case for Ivermectin has never gone away. It has been a political driven demon of the pandemic. with a ban on its use handed down by our overlords from the WHO AKA bill gates and the WEF. It is very suspicious given it has a less harmful profile than Paracetamol.

And the question that no one’s wants answered is, WHAT WERE THEY UP TO IN THE LAB?

They have never produced the proof of this being a natural occurrenc, but we have proof stacked to the roof of the lab leak theory. Occam’s Razor states that the bat had nothing to do with this out break.

The only thing that Fauci is arguing about now is the technical definition of gain of function.

When we look at the way this virus is operating, gain of function seems to aptly explain the nature of this modified virus.

Rather than taking the scientists and their funders to task, we are still vilifying the unvaccinated. 40,000 military personnel are about to lose their jobs in the USA for refusing to take a vaccine, one we now know offers zero protection.

On other facts about this lemon of a vaccine and 5-11 age group which is getting a lot of medical and legal people up in arms. see our earlier article below https://planetb-media.com/the-medical-and-legal-system-are-striking-back/

Whilst NZ still encourages children to get vaccinated, if you study the data that comes from Pfizer in regard to harm of the vaccine versus a childs chance of harm from the virus, you get the following outcome.

“So, to put it simply, the Biden administration plan would kill 5,248 children via Pfizer mRNA shots in order to save 45 children from dying of coronavirus.

The Pfizer mRNA shot fails any honest risk-benefit analysis in children ages 5 to 11.”

Heads need to roll alright, but they will sooner blame monkeypox, the unvaccinated or Putin than admit we are just plebs to the elite. 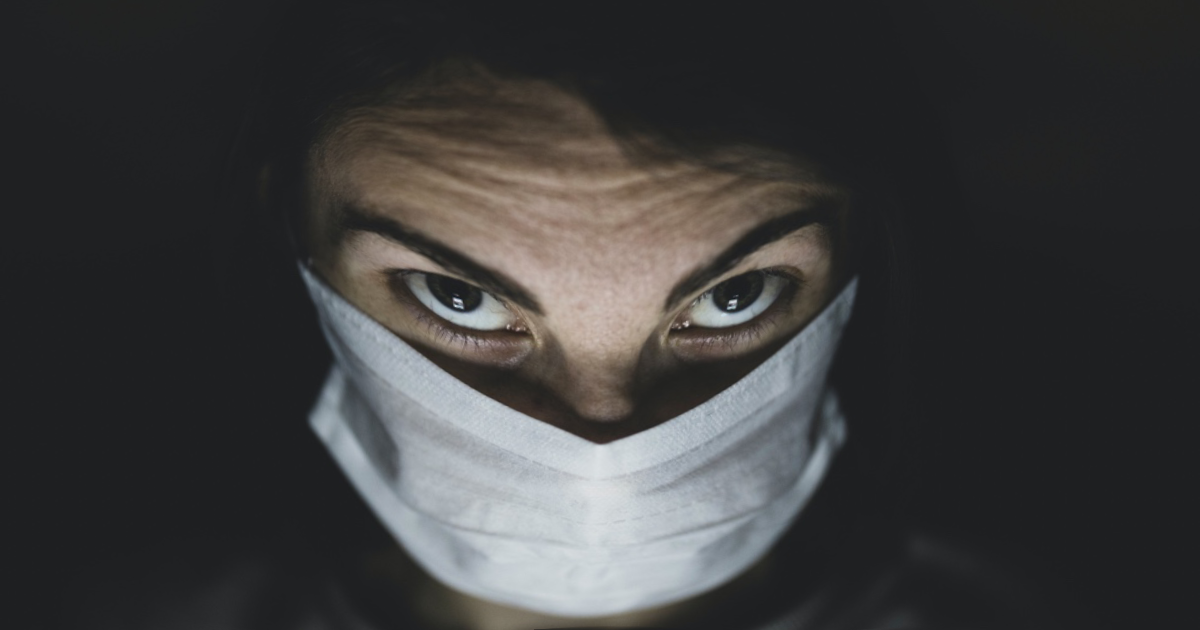 As an unvaccinated pure blood that hasn’t been sick, I’ll take any offers over 1.75 million to be a test subject lol