Zelensky about to be dumped as the media darling?

Human trafficking, corruption, missing donated weapons and the war is lost will become the focus of the media as the political class move on from the failed attempt to get Ukraine to kick some Putin arse.

Won’t be long before they find some Neo-Nazi’s too after pretending they didn’t exist.

Turkey is cozying up to Russia with Putin currently meeting Erdogan to discuss their differences as well as cooperation.

China has also made it clear they are with Russia.

Now the U.S. is busy looking for an off-ramp from the Ukraine war.

This month will likely see Russia control the eastern Donbas region and it will remain to be seen what plans Putin has from here.

It is very plausible that Zelensky will end up in the USA and perhaps after 8 years of fighting the Ukraine region can live in relative peace for a while.

The real losers will be countries like Germany who forgot how much they rely on gas from Russia.

As it cools for the northern winter the people will be reminded daily of the foolishness of their respective government sanctions as they live in a recession brought on by their COVID response and exasperated with their approach to Putins invasion.

Many will find this hard to believe after buying the fog of war propaganda about how well Ukrainians are fighting off the Russians. As said, these will go from what went wrong to ultimately admitting that the ex soviet state is filled with corruption.

They probably won’t go as far as admitting that the West is behind most of their woes as it’s just another failed U.S. takeover. Soros and Schwab will see this as a major defeat in their Build Back Better plan for the globe. And for this alone we can support the move to remove the influence over Ukraine the past few decades.

It was always going to end this way as the summer months passed and autumn arrived. Seems people are more interested in warm showers over shivering, scrubbing soap off with 10 degree c water while saying “take that Putin.”

Can’t wait to see the movie. 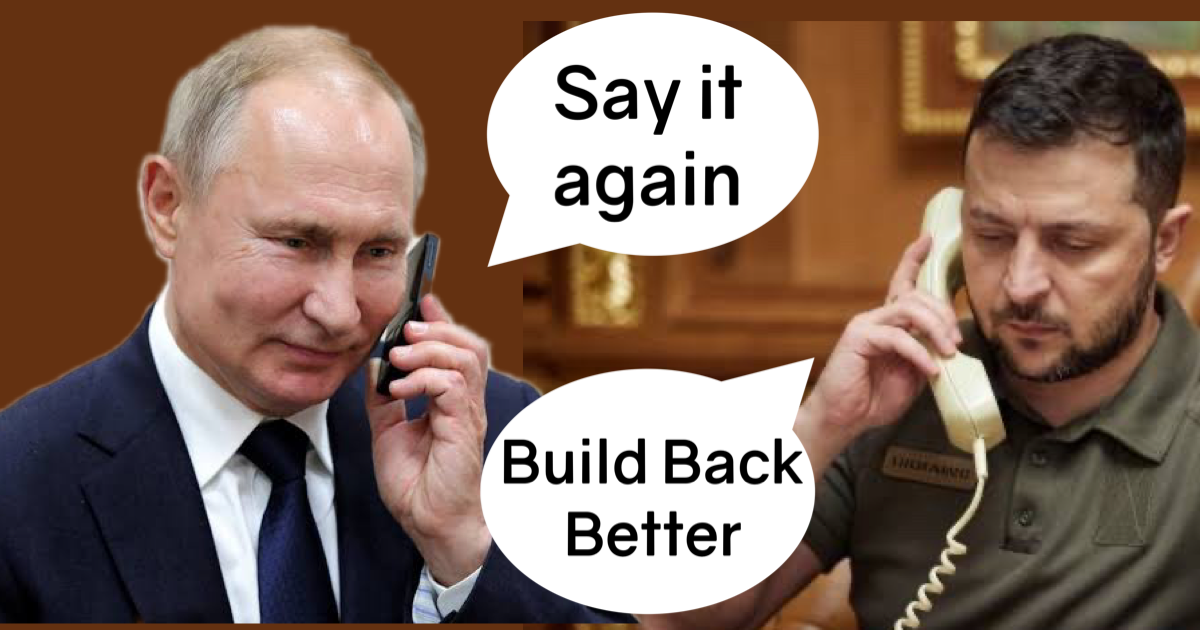 The bottom lines for Putin are that the Russians in the Donbas region are safe from persecution from Ukraine and azov militia/neo-nazis. The rest of Ukraine can not join NATO – full stop. Over time, other regions within Ukraine will look to leave Ukraine and join Russia as the corruption in Ukraine is unlikely to be removed. Getting rid of Clown-boi Zelensky will be a good start,but he is only a puppet.